Our SWOTY: Nil by Mouth founder Cara who fights against sectarianism in memory of Mark Scott

The driving force behind a campaign to rid Scotland of the blight of sectarianism has been named the 52nd Evening Times Scotswoman of the Year. 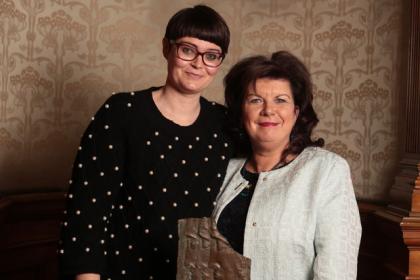 Cara Henderson, who set up the groundbreaking charity Nil by Mouth when she was a teenager, accepted the trophy at a glittering awards dinner in the City Chambers last night.

More than 250 invited guests cheered and applauded as the stunned 35-year-old made her way to the stage.

Cara launched the charity as she struggled to cope with the murder of her friend Mark Scott.

The teenager was killed in the street on the way home from a football match.

Cara said: “I’m shocked to have won – I felt honoured just to be included in such an inspiring and distinguished group of people.”

In a moving acceptance speech, Cara paid a touching tribute to Mark, who was just 15 when he was killed.

She said: “Mark never saw people in terms of labels, he just liked people. His instinct was always to approach, rather than back away from people.

“By reflecting on the person that Mark was, I have come to realise that at its heart Nil By Mouth stands for something positive.

“It’s about asking people to look inside themselves and by doing so, changing the world from the inside out.”

The Evening Times Editor’s Award was presented to First Minister Nicola Sturgeon, who said: “It’s a real honour to receive this award. I feel humbled to be among so many amazing women.”

Evening Times editor Tony Carlin said: “Our 2014 Scotswoman of the Year is a true inspiration.

“Cara’s determination, in overcoming the loss of her friend and ridding Scotland of sectarianism, is incredible. Her battle to make Scotland a more tolerant society is something we should all aspire to.”

St Enoch Centre, said:”As a judge, I wish to congratulate this year’s amazing winners, along with all of our wonderful nominees.

“It has been an honour to support the Evening Times Scotswoman of the Year Awards and its crucial role in recognising the many exceptional women who give so much without expecting anything in return.”

Comedian, actress and singer Elaine C Smith was the guest of honour at last night’s event