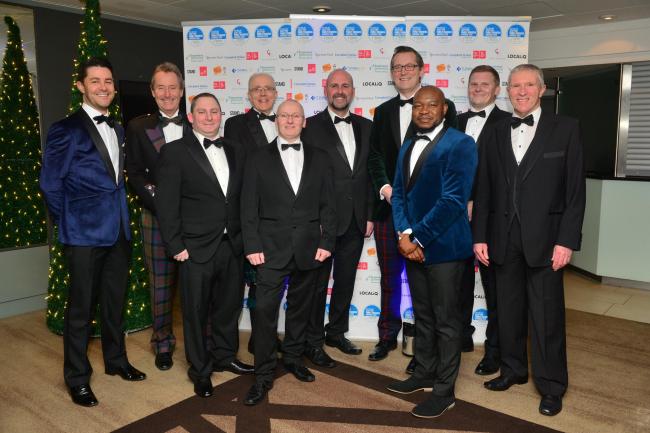 JAMES Donaldson and Sons was last night honoured for its outstanding contribution to family business at a major awards ceremony in Glasgow.

The historic company, which began life as a small timber merchant in 1860, received the top prize at The Herald Scottish Family Business Awards for 2019.

The Fife-based enterprise picked up the award at the conclusion of a gala dinner at the Crowne Plaza Hotel, attended by more than 300 members of the family business community. It was praised for its entrepreneurial mindset and willingness to constantly embrace change which has continued into its sixth generation.

John Anderson, of Strathclyde Business School, which sponsored the Outstanding Contribution award, said: “Many congratulations to all the winners and finalists who were fantastic representatives of the real wealth creators of Scotland. It was a great pleasure to have presented the award for outstanding contribution to one of Scotland’s most successful family businesses.”

Guests had previously seen the presentation of 12 other prizes from the awards’ contested categories, as The Herald and sponsors once again recognised the huge contribution made by family businesses to Scotland.

Hugh Lightbody, of Business Gateway, said: “Family businesses contribute to job creation, creativity and innovation across Scotland. This was brilliantly recognised at the awards, which covered a broad mix of categories and sectors.”

In the Scottish Family Business of the Year categories, Victor Pizza Company was victorious in the small/medium section and Allied Vehicles Group the winner among large companies.

Neil Grimmond, of Craig Corporate, said: “Our congratulations go to all the award winners, and in particular Allied Vehicles Group which won the Large Family Business prize.”

Deyrick Smith of Clydesdale Bank said: “Regardless of whether their business won an award or not, it was inspiring to see the energy and enthusiasm among the Scottish family businesses who came along to The Herald Family Business Awards 2019.”

Maggie Croft, of Stand, said: “The panel was impressed with the commitment to environmental issues demonstrated by Newton Property Management.”

Fraser Campbell, of Campbell Dallas, said: “We were delighted to celebrate the achievements of family businesses across Scotland at the Family Business awards.

“These awards highlight the dedication and innovation from leading family businesses that play a huge part in Scotland’s success.”

Grant Stevenson, of Burness Paull, said: “Congratulations to the winners across all categories. A range of successful and exciting businesses who demonstrate vision, entrepreneurship and a dedication to what they do.”

Bernard Dunn, TL Dallas, said: “We had a fantastic evening celebrating the integral contribution that family businesses continue to make to Scottish society.”

For information on the 2020 awards, email nina.holmes@newsquest.co.uk.