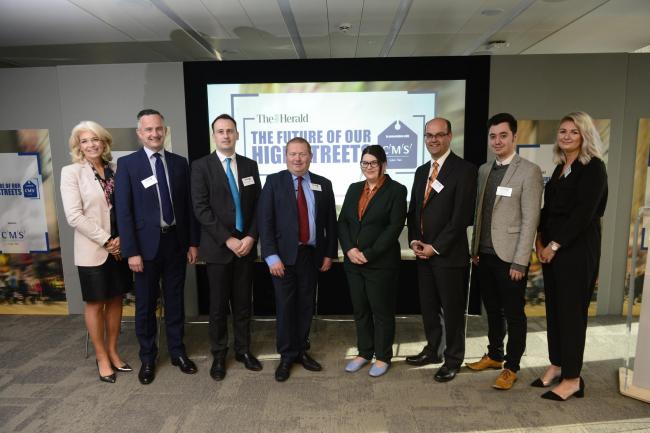 The Future of Our High Streets -JS. Photo by Jamie Simpson

BUSINESSES and policy makers must look beyond retail to ensure the future vibrancy of Scotland’s challenged high streets. But shops will remain a key element of the high street experience, albeit the model will be very different to the traditional structure which has pervaded for the last 50 years.

An event held by The Herald in Glasgow, in association with law firm CMS, heard from experts on how the retail sector can respond to the deep structural challenges it is facing. Delegates at The Future of Our High Streets event were also given a Glasgow perspective from council leader Susan Aitken, who outlined steps being taken to transform the city into a vibrant place where people live, work, socialise, and sample cultural life.

Nearly 100 delegates gathered at the Glasgow office of CMS for the breakfast event, which was introduced by the firm’s managing partner Allan Wernham, and featured a panel discussion chaired by Gordon Stevenson, director of digital transformation at Newsquest, publisher of The Herald. The panel included Emma Mackenzie of NewRiver; Katie Moody of Glasgow’s Princes Square; Mark McMurray of CMS; David Lonsdale of the Scottish Retail Consortium; Colin Borland of the Federation of Small Businesses in Scotland; and Joe Barratt of The Teenage Market.

Experts were asked about the threat posed to traditional retailers by “online price transparency”. Observing that this can lead to a “race to the bottom”, Ms Mackenzie said it has already led to a rationalisation of store portfolios and lower rents being received by property landlords.

And she said it has heightened the need for shop owners to sharpen their focus on customer service.

Ms Moody said one way retailers can adapt is by turning their stores into a “showroom experience”.

She stated: “What retailers can do is that value add – yes, the exclusive products of what else you can get in store. For example, if you are in buying a piece of jewellery, can you get your own piece of jewellery cleaned?”

Mr Borland highlighted the strength physical shops still have over online operations, noting that consumers who buy products in shops have ready access to them, and can return them that day if needed. He said independent retailers can offer value-added services, which can improve margins.

Much of the discussion flowed from Ms Aitken’s speech, which laid out in stark terms the need to improve the appearance of the city centre. The council leader said Glasgow has a “je ne sais quoi that plenty of other European cities would give their right arm for”. She highlighted investment being made in the Avenues projects which will transform key thoroughfares such as Sauchiehall Street, and the success in bringing major events to the city.

However, Ms Aitken said that “if we just brush aside our challenges and pretend that they don’t exist, then we will fail to take the city forward to where we need it to be. Most of all, we will fail to do the right things for our citizens.”

The panel was asked about tackling the increase in vacant units on Scottish high streets. Mr McMurray suggested changing the current rules around changing property uses to find different purposes for units without the requirement of planning applications.

He said: “That’s something going through planning reform we are feeding into.”

The cost for retailers doing business on the high street, including rising business rates, the apprenticeship levy and the living wage, was highlighted by Mr Lonsdale. He welcomed moves to change the rates system in Scotland, including more regular revaluations, but said the tax was still to high. “We now have a tax rate at a 20-year high, and the rates bill for retailers alone went up by just over £13m two months ago,” he said.

Mr Barratt would like to see young people being given a say in shaping the high street. “It is about getting young people not only involved in running businesses on the high street, but making decisions about how town and city centres look,” he said.

Alison Gow, partner at CMS, said: “We are extremely grateful to our excellent panel of speakers for generously giving their time and expertise today and for the thought-provoking contributions they made to a stimulating debate. “