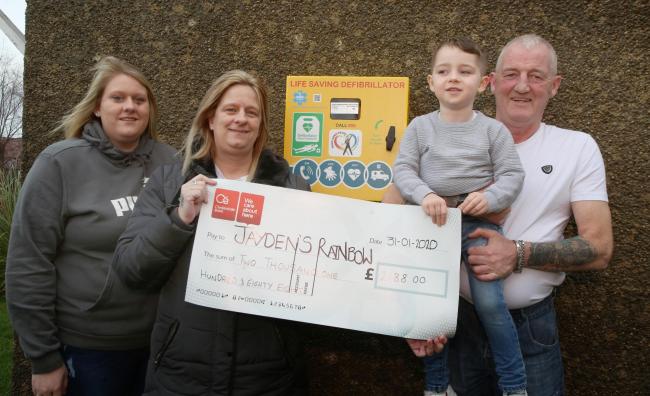 A BIG-HEARTED shipyard worker whose tireless fundraising for defibrillators is saving lives is in the running for a Tele community champion award.

Patrick Dunn, 56, was very moved by local mum Kathleen Orr’s campaign in memory of her son Jayden, who died suddenly away in 2017.

The caring grandad installed a 24-hour access defibrillator outside his house in the Port’s Bardrainney Avenue and has raised thousands of pounds for Jayden’s Rainbow – the charity set up by Kathleen and her family.

More than £3,500 has been collected so far – enough to pay for more than six machines to be installed across Inverclyde.

Dad-of-three Pat said: “I knew that if I wanted a defib on the side of my house, I would have to raise the money.

“We soon had enough for two, and then it just snowballed.

“I don’t know where it will stop but I’m just going to keep going.

“I’ve had responses from a whole lot of different people – people come up to me in the street and hand me £2 and small, local businesses and big companies are donating too.

“People are becoming more aware of the need for the machines now and asking more about them.”

Pat says he is thrilled to be nominated for a Tele award but his priority is raising awareness of the need for the life-saving machines.

He added: “I didn’t do this to get any sort of recognition.

“I did it because I want to help people.

“I’m very happy to be recognised for what I’m doing but I’m happier that I’m helping to raise awareness of the need for defibrillators.

“It is so important we have defibrillators in the community that people can access when they need them.”

Jayden’s Rainbow was set up by Kathleen and her family in memory of Jayden, who tragically died after collapsing at an ice rink.

Campaigning mum Kathleen has teamed up with St Andrew’s First Aid and together they are putting 30 life-saving devices across Inverclyde, where they are needed most.

Kathleen said: “Pat has been incredible and his support has helped push on Jayden’s Rainbow.

“It is so important to get defibs out in the community where they are needed most, as they are no good locked up in buildings.

“Pat has raised such a lot of money for us as well and we really appreciate everything he has done.”