Search begins for Scotswoman of the Year 2019

WHO should be crowned Evening Times Scotswoman of the Year 2019?

Our search, in association with St Enoch Centre, for a successor to last year’s inspirational winner Lucy Lintott, begins today.

Six years ago, at the age of 19, Lucy became the youngest person in Scotlandto be diagnosed with Motor Neurone Disease.

Since then, she has opened up her life to raise awareness of this devastating condition. She has also raised tens of thousands of pounds for research into a cure.

We want to hear who you think should follow in Lucy’s footsteps – and we want your nominations, too, for Young SWOTY.

Following the success of last year’s inaugural Young Scotswoman of the Year award, this accolade returns for a second, spectacular year.

It is open to girls and young women aged between 12 and 21.

We want to hear about inspirational individuals who have already made a fantastic contribution to Scottish society by helping others, perhaps overcoming personal challenges along the way.

The teenager from Dunbar inspires many with her determination to overcome the obstacles she faces living with cerebral palsy and she was one of the first British athletes to talk about the mental health stresses involved in dealing with life both on and off the track.

You can nominate for Young SWOTY by completing the online submission form, the form below, or emailing by Friday, December 20, 2019.

A judging panel will draw up a shortlist which will then be open to a public vote #voteyoungswoty across our website and social media platforms.

The deadline for nominations for the main award, 2019 Scotswoman of the Year, is also December 20.

Who has inspired or impressed, educated or entertained you over the last 12 months?

It could be someone famous, or a friend who has overcome personal heartache to help others.

Perhaps you know an unsung hero who deserves wider recognition, or someone at the helm of a social enterprise, who is using her business skills for good.

Maybe your SWOTY is a charity worker, going the extra mile for the benefit of her whole community, or someone who has overcome obstacles in her own life to change things for the better for all?

Previous winners of the event, which is generously supported by St Enoch Centre, have been pioneers in their field; they have changed laws and saved lives; and they have inspired people both locally and globally.

Some have raised hundreds of thousands pounds for causes close to their heart and others have put everything on the line to challenge injustice. 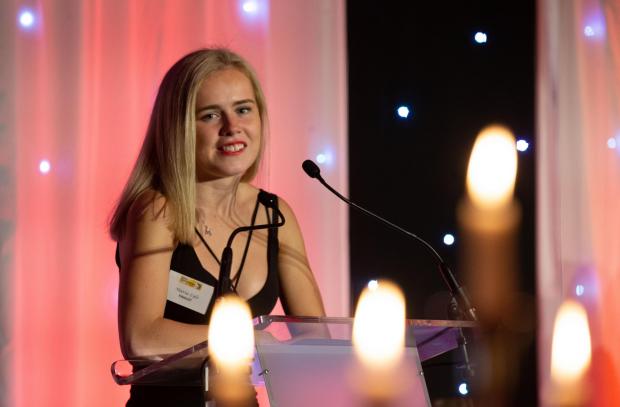 What all of these world-changing women have in common, however, is their ability to inspire others to make a difference.

St Enoch Centre general manager Anne Ledgerwood said: “St. Enoch Centre is proud to continue its support of the Evening Times Scotswoman of the Year Awards, which recognise the outstanding achievements of women.

“It is an honour to support such a fantastic celebration of our country’s exceptional women who give so much, without expecting anything in return.”

This year’s SWOTY gala dinner is back at the gorgeous Principal Grand Central Hotel and the winner will be announced at a glittering invitation-only ceremony on March 26.

Our 2019 winner will be following in the footsteps of some impressive women – such as last year’s title holder, Lucy Lintott, outstanding MND campaigner; 2018 winner Sally Magnusson, who founded Playlist for Life, the groundbreaking charity using music to help people with dementia; the 2016 winner Laura Young, who set up art therapy charity The Teapot Trust after the death of her daughter Verity; and Adele Patrick, 2015 champion, the driving force behind Glasgow Women’s Library.

Other previous winners have included Cara Henderson, who set up anti-sectarian charity Nil by Mouth following the death of her best friend; and Ann Moulds, who overcame a terrifying stalking ordeal to successfully change laws in Scotland, the UK and all over Europe.

We know there are many, many more women out there like Lucy, Sally, Laura, Adele, Cara and Ann, from unsung charity heroines to brilliant business motivators; from famous faces to ordinary mothers and grandmothers doing extraordinary things.

It is up to you to tell us all about them.

“Everyone at the Evening Times is incredibly proud of this flagship event, which has been celebrating the achievements of Scotland’s women since 1963.

“We are also delighted that Young SWOTY is back, to highlight some of the magnificent work being done by girls and young women across the country.

He added: “Our previous winners, including the current incumbents Lucy Lintott and Maria Lyle, are fantastic role models and an inspiration to us all.

“Every year provides a stunning shortlist of talent deserving of recognition and we look forward to hearing readers’ suggestions for who should hold the 2019 title.”

To nominate your SWOTY or YOUNG SWOTY of 2019, email nina.holmes@newsquest.co.uk by the closing date of Friday, December 20, at 5pm.

You can also place your nomination on the website http://newsquestscotlandevents.com/events/swoty/ or use the form below. Call 0141 302 6036 for more information.