Brexit, the health service and profound political change loom large in The Herald Scottish Politician of the Year Awards as they celebrate their 21st year.

First Minister Nicola Sturgeon is nominated for the prestigious main title for skilfully merging the case against Brexit with one in favour of independence, and fostering a sense of inevitability about a second referendum despite UK Government resistance.

Jackson Carlaw is nominated for stepping up to replace Ruth Davidson as interim leader of the Scottish Conservatives without missing a beat at First Minister’s Questions.

And Green MSP John Finnie is nominated for getting two highly contentious pieces of legislation on to the statute book – the smacking ban and the workplace parking levy.

The judges, chaired by Donald Martin, Editor-in-Chief of Newsquest Scotland, went through the most intense deliberations in many years before coming to their conclusions. 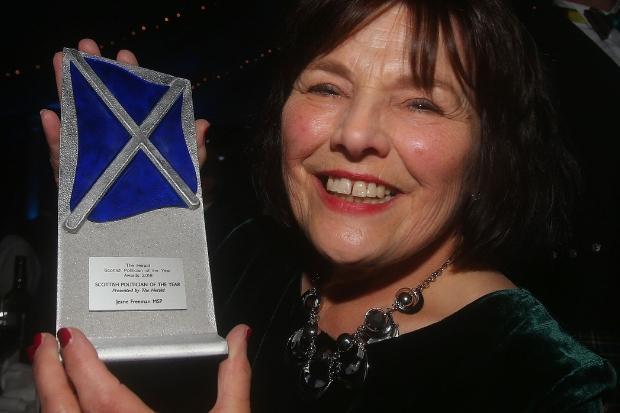 Jo Swinson is again nominated in the Best Scot at Westminster category after becoming UK leader of the Liberal Democrats and reinforcing her party’s uncompromising stance on Brexit.

Also nominated for her work on Brexit, much of it in the courts, is the SNP MP Joanna Cherry, QC, who played a key role in undoing the unlawful suspension of Parliament.

Her colleague Ian Blackford, the SNPs leader at Westminster, is the third nominee for consistently hitting his target at Prime Minister’s Questions and working with other parties.

Conservatives earned three of the four nominations in the Committee MSP of the Year award – Murdo Fraser and Adam Tomkins at Finance and Edward Mountain at Rural Economy – with Labour’s Jenny Marra recognised for her leadership on Public Audit.

In the Community MSP of the Year category, Labour’s Jackie Baillie is nominated for her work helping to secure cystic fibrosis drugs for constituents, the SNP’s Angela Constance for supporting families of people killed abroad and challenging former Cabinet colleagues about NHS problems in West Lothian, and the SNP’s Gail Ross for her work advancing rural rights.

Tory social security spokeswoman Michelle Ballantyne is a new entrant in the One to Watch category after her support for Brexit and Boris Johnson led to a plum spot at the party’s UK conference.

She is vying with two former nominees for the award, the Green education spokesman Ross Greer and the Tory justice spokesman Liam Kerr.

Ms Cherry is also nominated in the E-Politician of the Year category for invaluable updates on her legal cases. Mr Fraser and Justice Secretary Humza Yousaf are recognised for their witty and insightful social media contributions.

Ms Baillie is also nominated in the Public Campaign or Campaigner of the Year category alongside the Cystic Fibrosis Foundation for helping to get Orkambi and Symkevi made free at the point of use in the Scottish NHS.

Also nominated is Living Rent for its David and Goliath fight against the multinational Serco over the attempted evictions of asylum seekers in Glasgow, and the British Heart Foundation for ensuring all pupils are taught life-saving CPR in secondary schools.

The 2019 Awards, to be held at Prestonfield House in Edinburgh on November 21, are sponsored by Virgin Trains, NVT Group, ScottishPower, Royal Bank of Scotland, and Openreach. This year the awards are also supported by the Scottish Grocers Federation.

Hamish Fraser, group managing director of NVT Group, said: “As we learn of the nominees for this year’s awards, we are again impressed by the breadth of political talent on display.

“We are especially proud to support the Donald Dewar Debater of the Year category and are delighted to see some very worthy names on the shortlist for this important award. All of us at

NVT Group would like to congratulate everyone who has been nominated across all of the award categories and we wish them the very best of luck.”

Brendan Dick, chairman of the Openreach board in Scotland, said: “Well done to everyone who’s made the shortlist for this year’s awards. All the finalists in the Local Politician of the Year category, which we are supporting, have shown outstanding commitment to public service. It’s really uplifting to hear about the good work that goes on across the country. We salute them and wish the best of luck to all contenders.”

Malcom Buchanan, managing director of corporate and commercial banking at the Royal Bank of Scotland, said this year “has brought into sharp focus the impact politics plays across all aspects of Scottish life”.

He added: “It has been a significant year for the Scottish and UK Governments and has brought into focus the importance of strong leadership in politics. The finalists selected in the Politics in Business Awards category reflect this and each has shown a commitment and understanding of the needs and wants of businesses in these challenging and uncertain times. We wish every contender the very best of luck.”

Pete Cheema, chief executive of the Scottish Grocers’ Federation, said: “We are delighted to see such a strong shortlist for this award category. We know the judging process is a tough one and that the eventual winner will thoroughly deserve the award.”

Keith Anderson, chief executive of ScottishPower, said: “We would like to congratulate this year’s finalists for the awards. The judges have selected a group who have made a significant contribution and particularly those in the one to watch category, which ScottishPower are proud to support.”

Phil Whittingham, managing director of Virgin Trains, said: “We’d like to offer our congratulations to all those shortlisted for this year’s awards and for their contributions in an extremely challenging year for politics.”